My parents taught me that my heritage is primarily Northern European.  My mother was three-quarters Norwegian and one-quarter Swedish.  Her father was a first-generation American, born in Minnesota in the 1890s to full-blood Norwegian parents, while his wife, my maternal grandmother, was second-generation, I believe, and one of her parents was Norwegian and one was Swedish.  They were part of the great Scandinavian migration wave of the late 1800s.

My maternal grandfather was crippled in the influenza epidemic at World War I’s end.  My mother’s parents were distant cousins, in the clannish Scandinavian way.  One of my father’s sisters married a man of Icelandic heritage.  He had a genealogy chart made and proudly displayed it.  I noticed how the descent lines came together when first cousins married each other (probably all Icelanders have family trees like that, as they were so isolated), and I have ribbed him ever since about his inbred heritage.

So, my mother was allegedly a purebred Scandinavian.  My father’s side was the mongrel one, and I was taught that my father’s heritage was English, Welsh, Scottish, Irish, Dutch, German, French, and American Indian, which is the subject of this essay.

While I grew up, my father said that his mother was a quarter Indian, from Eastern Woodlands tribes.  I recall the Creek tribe being mentioned, and there was another Indian ancestor along the line, which made me supposedly 3/32 Indian, genetically, which was enough to qualify for federal aid.  My father had me attend a meeting at my high school, led by my sixth grade teacher, who became the Bureau of Indian Affairs representative in my school district, on getting federal aid for having Indian ancestry.  I soon applied to the Air Force Academy, to get that cheap education, which could have been costly beyond my imagining.

I got my mother’s looks, and could walk around in Norway without exciting any comment.  I was told that I looked Scandinavian (my father jokingly called me a “squarehead” and other terms while growing up), and other than being blond-haired and blue-eyed, I did not know what it meant.  I was raised in Southern California, which was not a Scandinavian enclave.  I did not understand until I visited the Norwegian pavilion at EPCOT Center about 20 years ago.  All of the men working there looked like my cousins.  It was only then that I understood that I looked Norwegian.

I never pursued any federal Indian aid for college, as my father said that his parents would never admit to having Indian blood, which would have been required to get any aid.  The Indian blood was just a curiosity to me.  I was raised as a typical middle-class American during the postwar boom, and my distant heritage was not important to me. It was a mere fact of my existence that I could not do anything about.

After college, I moved back to my natal city of Seattle and lived with my father’s parents for six months in total, over three different stints, and I lived with them when I met Dennis Lee.  The day that I met Dennis, I was able to walk from my paternal grandparents’ home to hear him speak at the Seattle Center, which was the beginning of my wild ride of radicalization.  Three years later, my life was wrecked, but I had been awakened.

Living with my paternal grandparents was one of my life’s happiest times.  I became close to them, and my grandfather in particular.  I twice visited the family homesteads in Kansas, where my grandfather had been born and raised.  While traveling there with him, he navigated us on a detour to a “battlefield” that had been hallowed ground when he grew up.  It was about the last “battle” ever fought in Kansas, in which dozens of Indians died.  Near his life’s end, my grandfather admitted what a terrible injustice that Anglo-American “settlers” had inflicted on American Indians.  He admitted that he grew up in ignorant and unenlightened times on the Great Plains, when he and his friends “shot anything that moved.”

The only real evidence of that I ever saw was that some relatives did look like they might have had Indian blood, and below is a picture of my paternal grandparents holding their youngest child, taken in 1943. 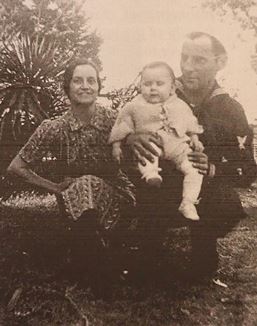 My grandfather is wearing his Seabee uniform in the picture, on leave from his Pacific Theater days.  When I look at that picture, I can tell where the Indian blood rumors came from.  My uncle in that picture could have been a convincing extra in Dances with Wolves, with black hair, dark eyes, an aquiline nose, and skin that easily tans, as my grandmother’s obviously did (one of my brothers has a huge beak of a nose).  So, the stories of Indian blood were at least plausible.

My paternal grandfather’s side of the family traced its genealogy to Scotland, where my family name comes from, and my direct ancestor migrated to Pennsylvania in the 1730s, as a result of William Penn’s experiment.  I don’t know what my paternal grandmother’s family tree looked like, but that is where the Indian blood allegedly came from, and her side of the family is where my redneck roots come from.  I spent a summer living with my father’s cousin, whose father was my paternal grandmother’s brother.  On that side of the family, none of them graduated from high school, and I mean from my generation.  The women were all pregnant by age 15 and the men often went to prison, if not working at blue-collar and menial jobs.  My father’s cousin’s husband that I spent that summer with was eventually beaten to death outside of a pool hall by an LA gang over drug dealing.  I grew up visiting that side of my family several times a year in nearby Bakersfield, where many Dust Bowl refugees ended up.  When I reached age 17 and was not yet married, they wondered what was wrong with me.  I have a soft spot in my heart for those people.  Dennis had the same heritage and was raised as a migrant farmworker, when white people still did that in the USA.

Having Indian blood from that side of my family would have been no surprise, but it was not important to me.  I wondered about why it was important to my father, and over the years, I slowly became aware of how many white Americans claimed Indian blood.  In recent years, it became a huge point of contention for a presidential candidate who claimed Indian heritage.

In my radicalized state, studying the American Holocaust and other crimes, I came to perspectives that I would have never dreamed of while growing up.  The genocidal “settler” attitudes toward the Indians, and how many descendants of those “settlers” grew up with quasi-proud tales of Indian blood in the family, has been a subject of some interest to me over the years.  I think that, in general, it reflects that change in settler attitudes from the “subhuman savage” to the “noble savage.”  They were subhuman savages when they lived on land that the invaders coveted, but as they disappeared under the boots, guns, and plows of “progress,” they became the fast-disappearing “noble savage.”  Claiming Indian blood is likely part of that change in attitude and, to some degree, it justifies the American residence of those “settler” descendants.

In recent years, many of those family legends have died at the hands of DNA analysis.  A few years ago, my father’s sister, who married that Icelandic descendant, said that she had her DNA read, and that she had no Indian DNA.  I had mine tested a few months later, and the results are below. 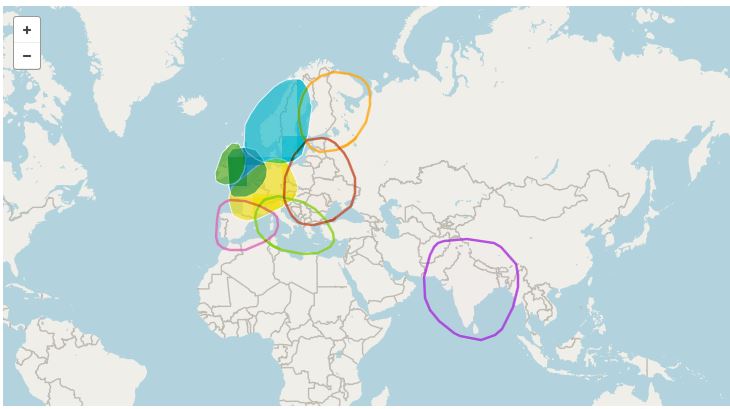 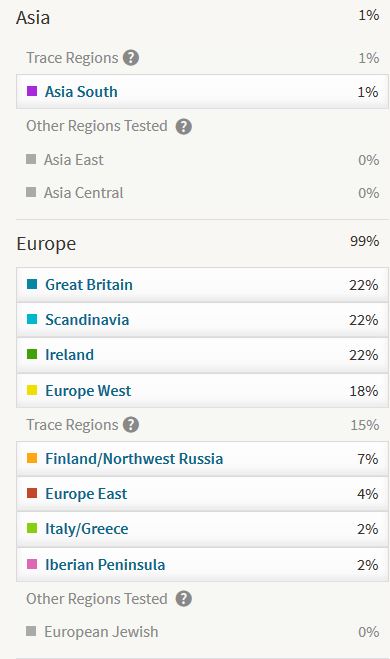 With those tests, that family myth, of my Indian heritage, died.  I am sure that the 1% Indian blood, as in subcontinental Indian blood, has an interesting colonial tale behind it that I’ll never know, but that, along with that DNA from Southern Europe, I guess came from my paternal grandmother’s side and probably explains her “Indian” looks.  In general, my DNA profile agrees to the nationalities that I was told when I was raised.  It is almost all Northern European stock, but my mother’s “pure” Scandinavian blood seems a little less than pure, if those results are to be believed.

Family myths are dying all over the USA with the rise of DNA testing.  A year ago, I mentioned to a coworker, whose desk sat next to mine, how DNA testing had destroyed the myth of Indian blood in my family, she had the exact same experience, of the story of Indian blood in her family, but when she had her DNA read, there was no Indian blood at all.

In the coming Fifth Epoch of the human journey, if we make it over the hump, race and ethnicity will vanish, along with nations, as geographic isolation ends, and none too soon.  We are all behaviorally modern and the Universal People, with far more in common than differences, and I consider it a positive development that these racial and ethnic myths are dying at the hands of science and technology.  Pride is one of the seven deadly sins, and we can do without ethnic and racial pride, whether it is based on fact or fiction.

Return to My Home Page (The address on the Internet of my home page is http://www.ahealedplanet.net/home.htm)